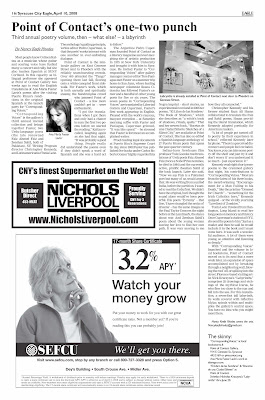 Dándole doble-click sobre el periódico puedes leerlo en versión agrandada....
Point of Contact’s one-two punch
Posted on: 04/11/08
Written by: Nancy Keefe-Rhodes, columnist -
features writeremail: city@cnylink.comT
hird annual poetry volume, then – what else?
– labyrinths:
Most people know Colleen Kattau as a musician whose guitar and soaring voice have fuelled many a concert and rally, but she also teaches Spanish at SUNY Cortland. In this capacity as bilingual performer she appeared at Point of Contact Gallery two weeks ago to read the English translations of Ana María Fuster Lavín’s poems after the visiting Puerto Rican’s renditions in the original Spanish at the launch party for “Corresponding Voices.”

Point of Contact is the miniscule gallery on East Genesee Street next to Phoebe’s with the reliably seam-bursting crowds. Over 400 attended the “Tango” opening there last fall, flowing onto a white-canopied front sidewalk. For Fuster’s work, which is both carnally and spiritually steamy, the hundred-plus crowd who jammed Point of Contact – a few more couldn’t get in – were enthusiastic.

“I got the translations when I got there and only had a chance to scan the first two poems before we started the reading,” Kattau recalled, laughing again as she had that night. “It was probably a good thing. People really did understand the poems even if they didn’t speak a word of Spanish and she was a hard act to follow.”
The Argentine Pedro Cuperman founded Point of Contact as a literary magazine and ever-morphing site of artistic production in 1975 at New York University and brought it with him to Syracuse. He invited Fuster to “Corresponding Voices” after gallery manager/senior editor Tere Paniagua met Fuster on a summer trip home to San Juan, where leading newspaper columnist Ileana Cidoncha has followed Fuster’s career and a handful of other young poets for five or six years. The seven poems in “Corresponding Voices” are translated by Libertad Garzón and Cuperman, Fuster’s first work appearing in English. Pleased with the work’s raucous, buoyant reception – at Saturday morning coffee with Fuster and Paniagua, Cuperman grinned, “It was like opera!” – he stressed that Fuster is foremost an accomplished writer.
Proof-reading legal documents at Puerto Rico’s Supreme Court by day, since 2001Fuster has published five books, [three of them] under Carlos Roberto Gomez’ highly regarded Isla Negra [editores] imprint – short stories, an experimental novel and in 2005 her poems, “El Libro de las Sombras/The Book of Shadows,” which she describes as “a witch’s book of shadows, rituals, spells.” That and her newest book, “Bocetas de una Ciudad Silente/Sketches of a Silent City,” are available at Point of Contact. She has also co-edited a Spanish-language anthology of 27 Puerto Rican poets that spans the past quarter century.
Indian-born Newhouse film professor Tula Goenka read translations of Urdu poets Faiz Ahmed Faiz (twice a Nobel Prize nominee, he died in 1984) and the currently active, prolific Zeeshan Sahil at the book launch. Later she said, “Now we say Faiz is a Pakistani poet but many of us would argue that. He was writing from a united India, before the partition. I wanted to read the Urdu first. We didn’t have the original, but I thought the sound alone would’ve been powerful. His poem ‘Tyranny’ – that line, ‘I have strangled the necks of dreams’ – has the same images as the Paul Taylor Dancers the night before at the Landmark, the dance about war. And Zeeshan Sahil’s poem about the young woman leaving her love to find her own path. It was very moving to me how they all connected.”
Christopher Kennedy and his former student Raza Ali Hasan collaborated to translate the Faiz and Sahil poems, Hasan providing the literal translation, which Kennedy adapted poetically for American readers.
“A lot of people got turned off to poetry by their experience in school,” reflected Kennedy later by phone. “There’s a perceived disconnect and people feel excluded. You know, you can take some poetry off the shelf and just try it and don’t worry if you understand it so much – just experience it.”
Kennedy read eight short prose-poems to the crammed gallery that night, his contributions to “Corresponding Voices.” Most are from the latest of his three books, the award-winning “Encouragement for a Man Falling to his Death,” like the pristine “Dressed for Church” – “something for the Irish Catholics here,” Kennedy quipped – or the vividly yearning “Loveliest of Zombies.”
Tonia León traveled from Huntington, Long Island to read her long poem on memory and history. Once Cuperman’s student at NYU, she sent the poem to him “just as a reader, and then he said he would include it in the book and I must come here. It was such a wonderful audience. A lot of them were young, so attentive and listening so deeply.”
With “Corresponding Voices” launched and the volume in local bookstores, Point of Contact moved on to its next feat a mere week later, an expansion of space accomplished not by breaking through a neighboring wall, blowing the roof off, or spilling into the street. Florence-based visiting artist Nick Kraczyna’s “Labyrinths” comprises 25 drawings and etchings of the mythical Icarus, he who flew too close to the sun and fell into the sea. For this installation, a seven-foot tall labyrinth, its walls covered with reflective Mylar, spirals within and multiplies the gallery’s central space. You have no idea who you might meet there.
The skinny:“Corresponding Voices,” at local bookstores & Point of Contact Gallery, 914 E. Genesee St., Syracuse443.2169 or pintcontact.org
Ana María Fuster Lavín’s work a www.islanegra.com
“El Libro de las Sombras” “Requiem” & “Bocetos de una Ciudad Silente”
atPoint of Contact
Swietlan Nicholas Kraczyna’s “Labyrinths” thru June 20.

Nancy Keefe Rhodes has written "Make it Snappy" since December 2006, a weekly column reviewing DVDs of recent movies that did not open theatrically in CNY and older films of enduring worth. She is a member of the national Women Film Critics Circle and covers film, photo and visual arts.
Publicadas por Ana María Fuster Lavin a la/s 9:14 a. m.